WE ARE AN INDEPENTDANT
IT HARDWARE & SERVICES PROVIDER

We are an undependent IT hardware and service provider
founded in 2005 by executives with extensive IT experience. 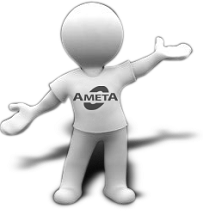 The contract
Only the terms set out in this document shall consitute the contract between the Purchaser and Ameta Computer A/S (known here-in as AMETA) for the sale of the equipment.

Delay
In case the delivery date is exceeded more than 30 days the Purchaser is entitled to cancel the contract unless force majeure is in question. With such a delay the Purchaser may claim damages for a loss suffered if the Purchaser proves that AMETA has shown gross negligence.

AMETAs responsibility for the loss that the Purchaser may suffer as consequence of the delay or of the lack of delivery shall under no circumstance exceed 10% of AMETAs sales price to the Purchaser.

Cancellation later than the above mentioned times, will result in a restocking fee of 25% of the sales price. AMETA should be notified in writing of the cancellation.

Refusal to receive the goods is considered a cancellation after dispatch, and will result in a restocking fee of 25% of the sales price, before a credit note can be issued.

The Purchaser is responsible for the return freight and insurance of the goods.

The goods must be returned in sealed and original packaging.

Upon the passing over of the risk of the equipment to the Purchaser AMETA shall bear no responsibility for shortcomings, apart from the liabilities set out in this clause. For that reason the Purchaser is not entitled to cancel the contract, claim damages or sustain any other claim of non-fulfilment.

AMETA clearly disclaims responsibility for any indirect losses such as consequential loss, loss of time, loss of profits or the like that the shortcomings may have caused the Purchaser.

Force Majeure
The following circumstances result in exemption from liability when occurring after the conclusion of the contract and preventing its fulfilment:

Labour disputes, strikes, lockouts and any other circumstance on which the parties have no influence such as fire, war, mobilization, unforeseen military calling-up, sabotage acts, requisition, impounding, currency restrictions, import or export prohibition, rising, disturbances, lack of working plants, general lack of goods, restricitions in the means of motive power, and lack of deliveries from sub-contractors or delay in such deliveries as described in any of the circumstances in this clause.

AMETA is entitled to inform the Purchaser in writing that the contract is cancelled when a fulfilment hereof in reasonable time is impossible due to one or more of the circumstances stated in this clause.

Product liability
In case a delivery from AMETA causes damage, AMETA is responsible to the Purchaser for personal injury if proved that the injury is caused by AMETAs fault or negligence.

In the event that AMETA may be held liable to third party according to the rules and regulations of product liability or according to general regulations on damage the Purchaser shall indentify AMETA as far as such a liability reaches beyond the limits stated above. The Purchaser is obliged to have prosecutions against itself filed at the same court that tries the case of claims for damages against AMETA in the event of damage claimed to be caused by a mistake in one of AMETAs deliveries.

Warranties
AMETA warrants that the equipment in question is sold free of all encumbrances, liens, charges and claims whatsoever.

AMETA reserves the right to replace the product with a similar, refund or issue a credit note.

Assistance by AMETA
If AMETA agrees to assist in the delivery and shipping arrangements it shall do so without any responsibility, but shall use all care in such assistance.

Assignment
The contract will not be assignable by the Purchaser without AMETA written consent, which AMETA shall be entitled to its discretion to refuse.

Credit terms and past due interest penalty
AMETA provides credit terms to customer based on approval from AMETAs debtor insurrance company Atradius. Terms available are from Net Upon Receipt to Running Month + 30 Days.

Customers failing to pay withing one week from past due invoice will receive a written reminder and warning.
If payment is not received within the third week from past due date, a interest rate of 5% of the total past due balance will be invoiced and invoicing will continue with 5% per Month, every month thereafter, until full balance is paid.
If payment is not received within the second month of past due date, AMETA reserves the right to revoke all previous agreed credit terms and set future terms to 100% prior to shipment.

Settlement of disputes
For sales to customers in Denmark any dispute between the two parties shall be settled at the Court of Aalborg, notwithstanding that the nature of the dispute may be a High Court case.

For sales to foreign customers any dispute shall be settled in accordance with the rules and regulations of the Danish jurisprudence at the Court “Sø- & Handelsretten” in Copenhagen.

Have a look at what we have on our eBay store.
We do not have all our stock on eBay, so please
contact us if you request a quote.

NOTE: These settings will only apply to the browser and device you are currently using.

Cookies are needed to get the website to work. They also help us to know a little bit about how you use our website, which improves the browsing experience both for you and for others.
Cookies on this site are primarily used for traffic measurement and optimization of page content.